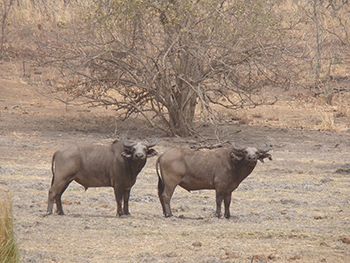 VISA available upon arrival in Ouagadougou, but best is to apply before.

Get up at 04h00, breakfast at 04h30 and leave at 05h00 (times vary according to trophies hunted) Drive to concession (25 minutes) and start to hunt Lunch at river in the bush with hippos around 11h00 (depending on temperature) Leave lunch spot around 14h30 and carry on hunting Normally back at the lodge around 18h30

The 260.000 ha hunting concessions Singou and Ouamou are situated in the eastern region, 350 km from Ouagadougou. 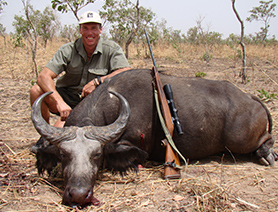 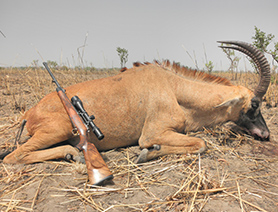 The accommodation consists of well-equipped air-conditioned bungalows with all basic facilities and a bathroom. The well-prepared meals are served in a beautiful dining area with a swimming pool. Laundry is done daily.

The recommended minimum caliber is a .375 Holland & Holland Magnum. The importation of ammunition is not a problem. Hunting is mostly done by walking and stalking.

It is not too hot in January, February and the first half of March and the hunting conditions are fine. It gets very hot in April and hunting becomes more difficult because of the heat. It rains occasionally in April, but more so towards the end of the month. It is dry most of the hunting season. The vegetation in West Africa is predominantly savannah and bush combined.

Normal hunting clothing can be worn during the day and bring along a hunting jacket as well. Bring at least four pairs of trousers or shorts and shirts. Do not forget your pair of well-worn boots, a hat and sunscreen.

This is a Malaria area. Please take precaution. Insect repellent is strongly advisable. A Yellow Fever vaccination certificate is compulsory.

Hunting is mostly done by walking and stalking....Contact us